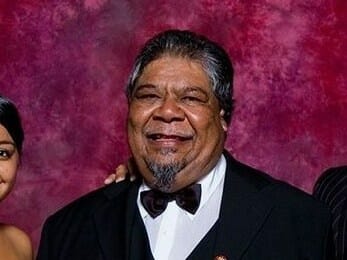 Mr Ah Kit, better known as Jack, was a larger than life presence in the NT Labor party and the Northern Territory more widely.

He passed away at the Royal Darwin Hospital at the age of 69.

“His achievements were many, and we will hear stories of these in the coming days and weeks,” the statement from his family read.

“But what we should remember, above all, his great sense of humour, his love of country and his love of friends and family.

“As his family members we are, of course, in mourning. But we are also aware that this is a life that should be the focus of celebration and commemoration.”

Tributes poured in on social media in the hours after the family announced his passing Sunday night.

Chief Minister Michael Gunner said Mr Ah Kit was an “important figure” in the lives of many Territorians.

“He was a strong leader and a great counsellor, dedicated to upholding the rights of Aboriginal people,” Mr Gunner said in a statement. “And he had the wickedest sense of humour in the North.”

“Another great legend of the NT has left us,” Mr Vatskalis wrote on Facebook. “I’ll miss you Jack. I’ll miss your humour, the Greek swear words you spoke like a real Greek, your saying that you were the real Chinese in Parliament House upsetting greatly some opposition members. I’ll miss your passion about the real politics, the one that matter for the small people.

“You were a real gentleman, a real Territorian.”

Mr Ah Kit’s story is a uniquely Territorian one

Born John Leonard Ah Kit in Alice Springs on July 22, 1950, he was of Aboriginal and Chinese heritage.

Mr Ah Kit arrived in Darwin (the Parap Camp in Stuart Park) with his family at age four. His father was a wharfie and was heavily involved in the Darwin Chinese Recreation Club as president of the Darwin Amateur Basketball Association.

Jack was an excellent athlete and horseman by all accounts. When he was Sport Minister, he hit a goal at Marrara Hockey Stadium from the halfway line, impressing many.

Jack’s early jobs were pretty much unskilled: carting parcels for customers at Woolworths, selling newspapers on the streets and work at the abattoir, then jobs on cattle stations mustering bullocks on horseback and driving trucks.

Former NT Labor MLA Neville Perkins first sparked an active interest in Aboriginal politics for a young Jack. It was 1971 and he was 21 when he attended his first NAIDOC march in Alice Springs where he met Perkins.

At 27, Jack went to the South Australia Institute of Technology in Adelaide where he earned his Certificate in Community Development and an Associate Diploma in Social Work.

He later returned to the NT and worked as the district officer with the then Department of Social Security in Katherine. The area he covered was bigger than Victoria including outstations in central and eastern Arnhem Land, cattle stations of the Barkly and Victoria River region, and fringe camps of townships scattered up the Track.

During the 1980s and 1990s, Jack worked as the boss of Kalano – Katherine’s Aboriginal town organisation; then for seven years as the director of the Northern Land Council and then for three years as the executive officer of the Jawoyn Association.

In 1983, he was elected to the Northern Land Council, representing the Katherine region.

His time in NT Parliament started after being elected as the ALP Member for Arnhem on October 7, 1995 in a by-election following the retirement of Wesley Lanhupuy.

This was Jack’s second attempt at election; he’d run in Goyder for the ALP in 1990 losing to the CLP’s Terry McCarthy.

Jack was sworn into cabinet as the Northern Territory’s first Aboriginal minister following the 2001 NT general election that saw the first Labor government formed in the NT.

He retired from Parliament in 2005, citing health concerns. Mr Ah Kit told the ABC about his retirement:

“Oh it was a very hard decision, one of the hardest decisions I’ve had to make in my whole life,” he said. “I’ve never been one to be known to go into things half-hearted, I’ve worked flat out for the last 25 years and all that builds up. And you get to a stage where you know, your health is starting to suffer, you talk to your family and then you have to sit down and decide what is the best decision to take.”

Jack Ah Kit was seen as a progressive politician who didn’t want to be thought of as simply an Indigenous one.

He had at times agreed with conservative politicians on some issues.

In one of his more controversial statements that upset some, he said in 2002 that it’s impossible to find a functional Aboriginal community anywhere in the Territory.

Jack also told the ABC when he retired in 2005 that he hoped he had made a difference in the NT and would be seen as a role model for better politics here.

“I certainly hope that the quality of politicians that we develop and nurture makes for a better Northern Territory and therefore a better country called Australia,” he said.

Mr Ah Kit was given the Life Achievement NAIDOC Award in 2007 and was awarded an honorary doctorate from Charles Darwin University in 2009.

In 2019, he was appointed interim CEO of the NLC but resigned from that after experiencing health problems again.

Mr Ah Kit is survived by his wife Gail and daughter Ngaree Ah Kit, who is the current Labor Member for Karama.

Ms Ah Kit said in a statement Sunday night that that the family is “devastated and have appreciated the outpouring of support”.

“We will reflect on my Dad’s passing before sharing details of how we plan to celebrate his life,” she said.