‘I’ve never seen anything like it in my life:’ Crocs gather en masse at the shrine of the dead cow 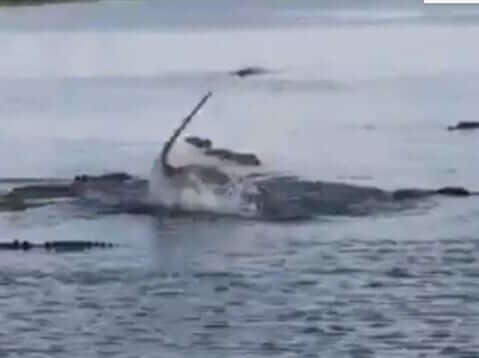 WATCH THE VIDEOS: Darwin fisho Jason Charles captured on videos, a marauding swarm of about 40 crocodiles collecting trying to devour a cow carcass, while fishing in Corroboree.

Mr Charles said his boat passed just 15 to 20 metres away from where the crocodiles were gathering while he was fishing on Thursday.

He said that he counted 29 crocs going for the carcass but saw more hanging around the outskirts, which pushed the total number to around 40.

Most were between three and four metres long, Mr Charles said, although there were two or three that were over four-and-a-half metres long.

He added that he returned an hour later and the carcass was completely gone.

“I’ve never seen anything like it in my life,” he said.